Maria, where did your desire to be a director come from?

It comes from my childhood. Since I have been dancing for as long as I can remember, I started doing plays and musicals to entertain children of my parents’ friends who came to our place rather frequently.
All summer we prepared the play, my cousin wrote the script, we made scenery, sewed costumes, and at the end of the summer we put on a show on the volleyball court, pulling a curtain between two pillars. I didn’t know that I was a director, it’s just that everyone called me that way.

And one day I told my mother: «I think I want to be a director”. But she answered: “Masha, it’s difficult to be a woman director, you won’t earn any respect or money,” my dad passed away, and I decided that I need a serious profession. I did not know what I wanted, but I studied well and entered the Faculty of Journalism at Moscow State University.
After graduation, I still did not know what to do, and I had to remember what I did all day long, for which no one paid me money and I was happy. In general, this is what I’m doing now (although sometimes after all producers pay me), directing is something that helps me to be alive, and it inspires me.

It comes from my childhood. Since I have been dancing for as long as I can remember, I started doing plays and musicals to entertain children of my parents’ friends who came to our place rather frequently.

Can you tell us a bit more about yourself, what is your background?

As I said, my path was not so straight forward. My first education was as a ballet dancer. I have been dancing professionally since the age of three, but then I had to leave this area.

I graduated from the Faculty of Journalism of Moscow State University, where I was engaged in documentary filmmaking in sound and video, and then I studied creative advertising at the Wordshop Academy, along this path I managed to work as a copywriter at BBDO, a producer, a YouTube content director and a cat researcher – this is my funniest job.

And after I studied directing at the Moscow Film School, I have been just directing videos and movies.

You are an accomplished director, you do music videos as well as documentaries and fiction. Can you explain to us how you work according to these different media?

Fiction for me is an opportunity to talk to people, to make them not feel alone with their problems, to understand that it’s ok if they feel something. But it seems to me that for a director who makes feature films it is very important to see real life, plasticity, texture, and how people generally behave in life. That’s why I consider documentaries an important part of my work, educational, observing, helping me to understand people better, the opportunity to do important social projects that may help someone.

Music videos are my outlet! On the set of music videos I remember the ballet backstage, these choreography runs, rehearsals, for me this is my small homeland – to combine movements with music, control the choreography of bodies and cameras, make something beautiful and with music.

Advertising for me, as for many other directors, is an opportunity to earn money with what you can do the best, and I really like working with smart clients and agencies. Besides money, since I studied advertising creative, this is an important way for me to help brands to become recognizable and to fulfill their business goals.

We got to know Tape production through an advertisement and they decided to help on a creative project with the Wooden Whales music video. So you never know which collaborations will take you where.

What were your reference and your inspirations for “Field of miracles | Wooden whales ”?
It seems to me that references are always an individual thing. To come up with an idea, someone needs firstly to look for the references and say: «I want to shoot just the way someone did». For me, it rather happens like this: I first see some pictures, and then I select references for them. For me, the selection of references is complicated by the fact that I can’t always find something already embodied visually the way I saw it.
In this music video, the visual references were rather from fine art, mythology. I focused on the myth of Tristan and Isolde and tried to embody it metaphorically. This is a story of romantic love in which two characters drank a magic vine and became infected with a painful love that led to their death. For me, romantic love is, first of all, the imposition of projections of one’s perception on a person. And this is exactly the idea I wanted to embody in the video, because, of course, you can’t understand the lyrics, but it is about this, about the story of the unhappy love of Sveta, the soloist of the group.

It isn’t just for a beauty that at the beginning the heroes pull wine-colored fabrics from the vat, lay
them on top of each other, and begin to grope through it. As if through some kind of projection, they
begin to study each other, but their true faces are hidden. And this big mistake at the initial stage of
their relationships leads to tragedy.

There is also a reference to Icarus in the video, when the main character, having flown high, fell low and lies with scorched wings. To Michelangelo’s “Pieta” – there is one scene where Sveta, the main actress and the leader of “Wooden whales”, and Stephan, the main male character, are sitting on a stone. And Sveta in such a red stole is for me a symbol of a devouring mother.

It seems to me that references are always an individual thing. To come up with an idea, someone needs firstly to look for the references and say: «I want to shoot just the way someone did» 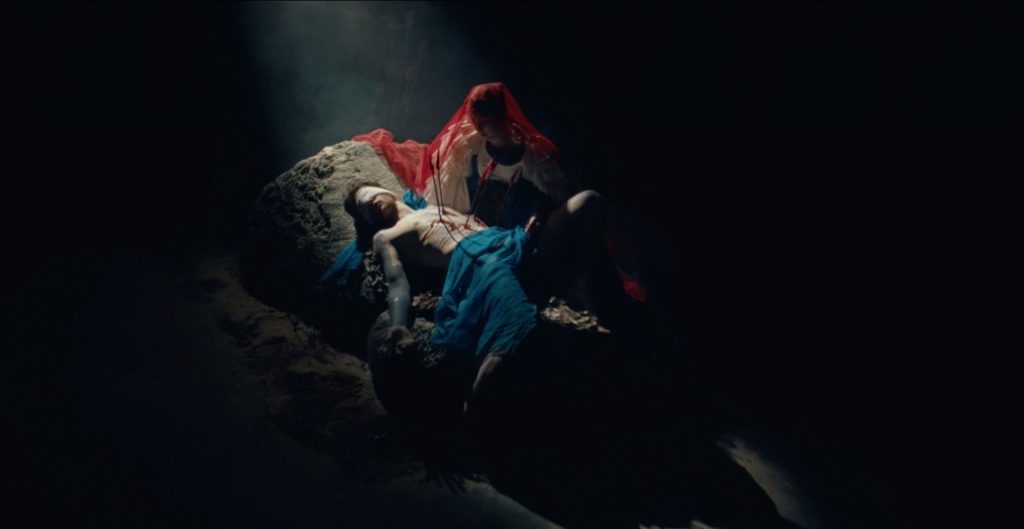 In fact, this is a metaphorical retelling of a tragic love story, a story that has happened to many of us. When you don’t get to know a real person – the way he is – but create an image for yourself, fall in love with him or her with some kind of codependent love, and then this leads to a dramatic end. Any already shot things weren’t taken as the references.
Your experience as a ballet dancer in Moscow should probably help you to feel the music, and to better portray the emotions to be transmitted?
I think, yes, this experience helps me a lot. In ballet you are taught to tell a story in a plastic way, whether it is your body or some object that you use for this. When I’m trying to help an actor express an emotion, I always think about how the person would move in that moment. 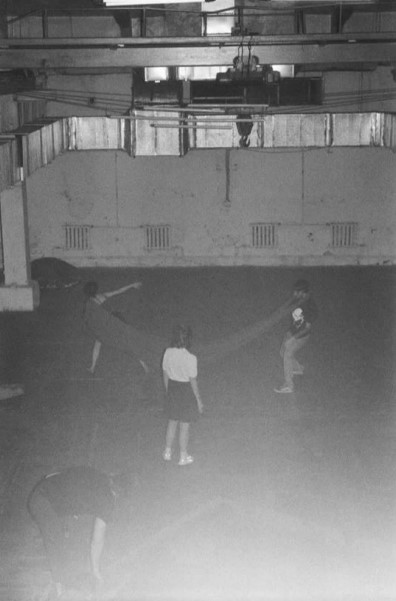 As for music, it seems to me that this is either given or not, of course, people who aren’t inclined to feel music are not taken to ballet, but it is not necessary to be a ballet dancer or musician to do this.

I have a good ear, it helps not only in my work with music, the rhythm of editing, but also in languages, for example, which leads to awkward situations. Once when I was 14, I had a summer job in a souvenir shop in Moscow, and a group of French people came to visit us. I have been learning French since the age of 6, and I went up to them and asked in French if I could help them with something.
They heard my pronunciation, and bombarded me with quick questions and enthusiasm, and my tongue seemed to fall off, I couldn’t even answer the question where I learned the language.
Then I went to the toilet and sat there until the group left. Such a story about a good ear from my childhood, somewhere works, somewhere not.

“Field of miracles | Wooden whales ”, won an Award at the RED MOVIE AWARDS. How did you work with the creator of the music to put it into images?
Probably, the guys from the group trusted me, because we worked on enthusiasm, collected crowdfunding, where the fans of the group and people who were simply not indifferent to the idea helped us raise $ 3,500. Of course, Tape production helped us, but that was the biggest part of our budget. There were minimum edits to me after we finished the treatment, which everyone liked. Actually it was a year before the final release of the video, so, of course, details had been still improving in the process.

When I’m trying to help an actor express an emotion, I always think about how the person would move in that moment.

For example, in the original idea there was no baby at all. It was my dream – a baby who turns into a plastic baby doll. I suggested this to the guys, they liked it, and we decided to add it. The treatment was being transformed, the idea lived. The most important words that I heard were said by Sveta.

She came to the set and said that everything was exactly how she imagined, that the scenery was very similar to the nature of her hometown of Murmansk, so we were doing some kind of documentary story, both based on the real story of the soloist and in the scenery that is understandable to her.

Your images are very beautiful, poetic and dreamlike, do you find that in your other productions?
I hope they are all good in their own way. But I’m not a director of one style, I like to try new things. And each work requires its own approach, each concept requires its own visuality. In a music video about dreams, you need to shoot dreamlikely. But, for example, my film “Gazing through touch” , it’s about blind people who work in a factory for the blind, where they collect pipettes. I specifically shot this film with a documentary photographer Vlad Dokshin, not a video DOP, so that the shots were static, almost without movement, but quickly lining up in perfect compositions, because that’s what documentary photographers are good at. The blind don’t run, they walk very slowly, and I wanted to freeze with them.
In the clip some images are reminiscent of paintings, your shots are very composed. Are you inspired by painter or other arts for the film ?

Yes, I have already mentioned this above. Me and the DOP Mario Kim, and the production designer Julia Orlova were inspired by art. Once Mario set the light over the scene with “Pieta”, and hung a lightning pipe over the heroes, the light was very even and pouring.
I went up to Mario and said: “I didn’t like the lightning, we need to come up with another idea, how to do this”. He told me that he doesn’t like it either. So we decided to make a divine beam and it worked. So if you already take references from fine art, you need to work with them according to their laws, you hardly can imagine a better way. 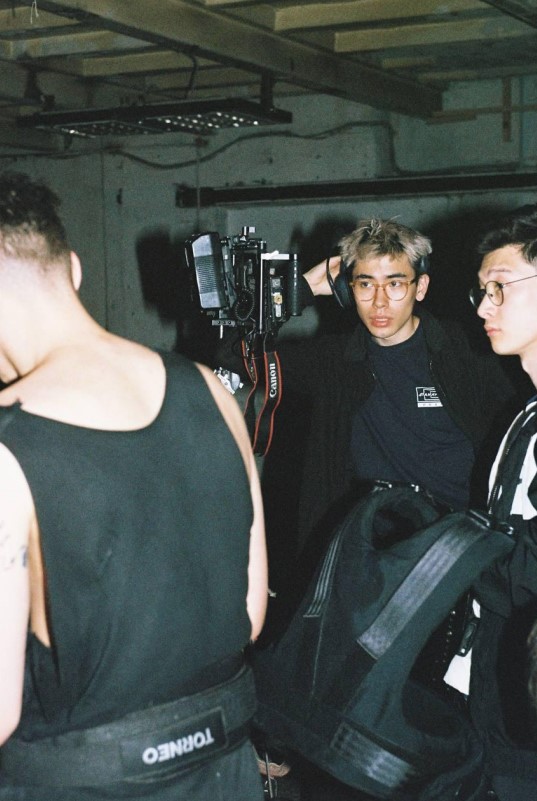 What is your next project?
At the moment I’m working on a full-length script about a separation from mother as a separation from homeland with a screenwriter from Belarus. Our countries are now in similar situations, and it is important for us, of course not in a directly autobiographical way, to tell what we felt in our relationship with our mothers, and what we feel about our states. I am also doing a French telent visa and I hope to work on french projects in the near future, but it is very vague at the moment. 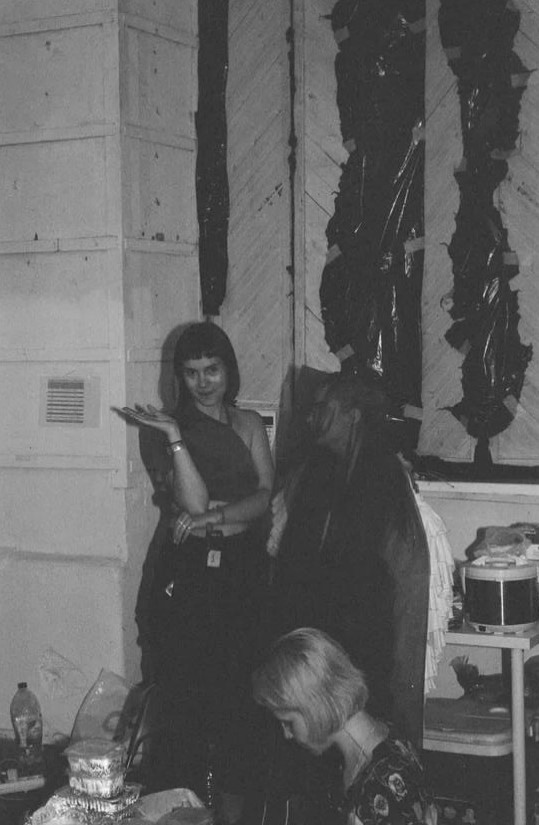