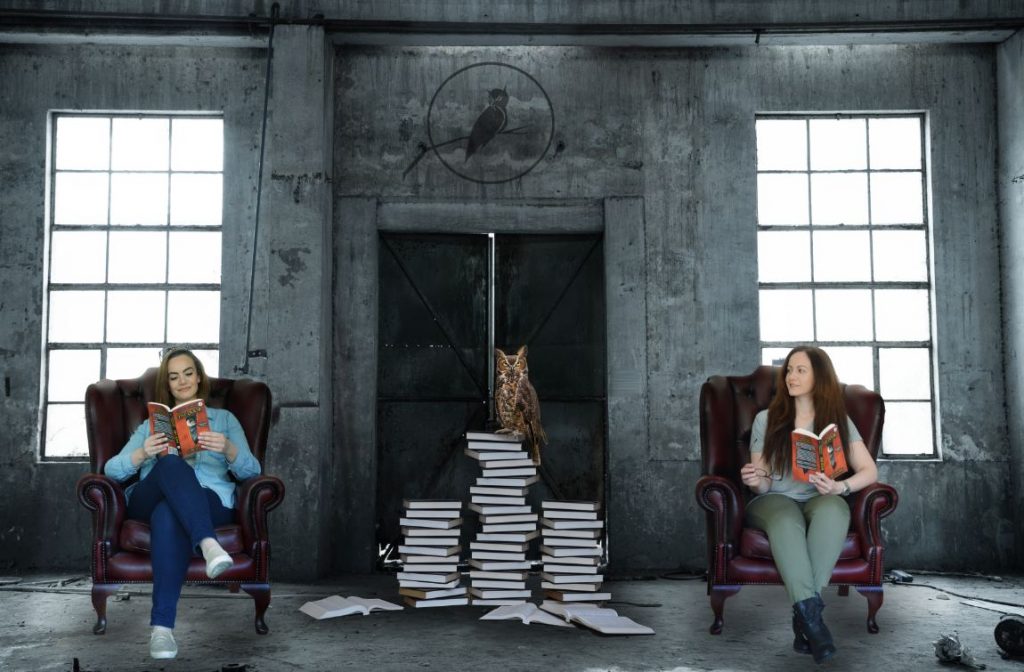 Samantha, Allison, tell us a little more about yourself. Where did your desire to be a writer come from?

We grew up during the 80s and 90s and saw some of the best movies and TV shows that inspired us and ultimately gave power to our imaginations. We were always naturally drawn to various creative outlets; whether it was painting, photography, game design and animation, or writing, we both thrived by tapping into our artistic sides. Writing came naturally to us; we did not have to search for it.

For us, the desire to write was also the art of storytelling, the imagination to create different worlds and compelling characters to root for when faced with adversity and hardship. Ultimately, we also wanted to teach our readers that whatever scenario our characters faced, they always had options and choices—some good, some bad.

Watching TV shows and movies like Amazing Stories, The Twilight Zone, The Thing, Aliens, A Nightmare on Elm St, Z Nation, The Shining, and Predator ignited our passion and curiosity in the horror genre, especially the fear of the unknown.

Everything blended perfectly between us—the passion for writing and our love for the horror genre.

For us, the desire to write was also the art of storytelling, the imagination to create different worlds and compelling characters to root for when faced with adversity and hardship. 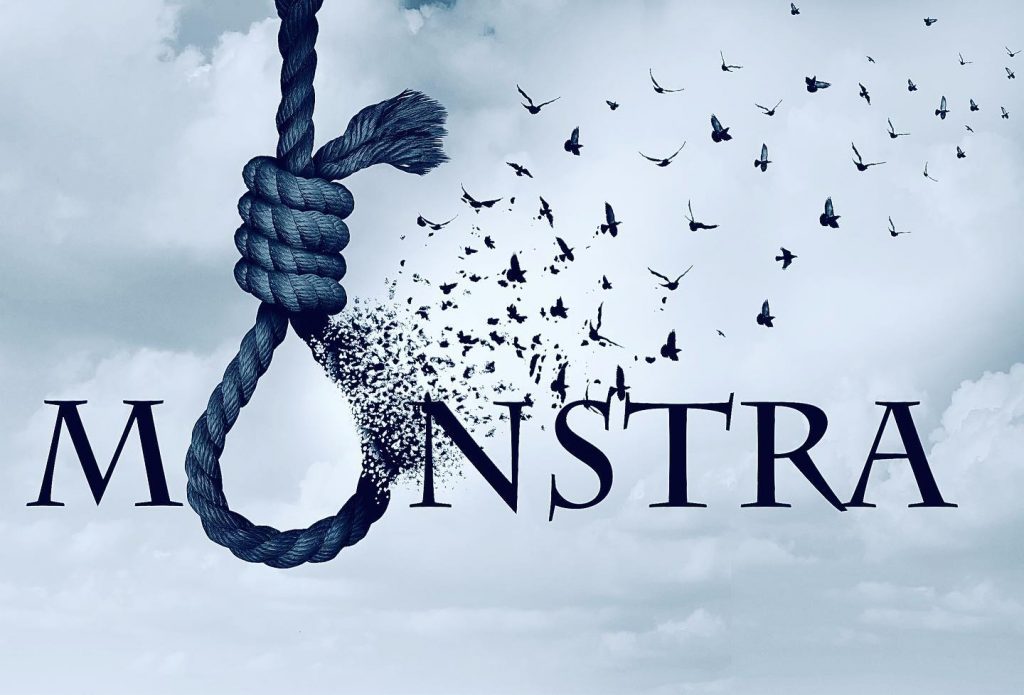 Can you tell us a bit more about yourself? What is your background?

We are sisters, both left-handed, children of the 80s, and we are both Geminis! Born and bred in Australia, we also speak fluent Spanish thanks to our family background in South America (Argentina) and Spain. Samantha is learning French, and Allison speaks basic Italian. It’s all very multilingual!

Samantha: I started my career in Visual Arts, followed by Games Development and Design—I thrived in the artistic aspect of Games Design and the programming side. Seeing your creations come to life is a magical experience, but it is also about team effort. I wanted a different avenue to quench my creativity, and writing was so natural that I never looked back.

Allison: I always knew I wanted to write but didn’t know how to begin. I started doing a lot of editing work for other writers and authors, but in my early twenties I decided to write my first book, a thriller. After that, I wrote two other books with the same publisher. I was on cloud nine because I knew I had found my calling, but simultaneously, I found it very isolating, so Samantha and I decided to join forces and write together under our pen name – Garcia Sisters.

Our first book, The Door, was published in 2017, and we found ourselves on the radio talking about our love of writing and horror and being featured in various magazines, newspapers, and blogs. Early into our careers as authors, a highlight for us was being invited to officially launch our book at the Melbourne Writers Festival—that was a huge deal for us!

After that, we published more books titled Cinema 4 and Flight of No Return. We also published our first horror-friendly children’s picture book, The Adventures of Max and Oscar: Curse of the Halloween Zombie!

It was a very organic process, from writing novels to transitioning into screenwriting. Many say it was expected. We adapted The Door into a pilot and have never looked back. We work on our true passion daily—writing horror for film and TV! 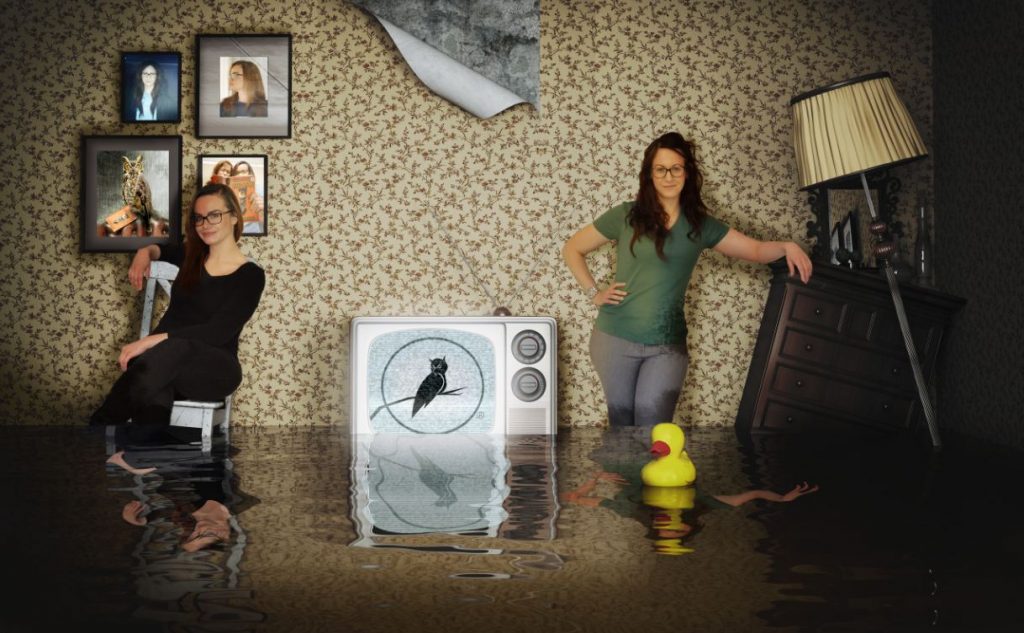 You are two sisters; how do you write? Isn’t it too complicated?

We get this a lot! When it comes to writing with family, many people wonder how it works, but for us, we make it work! We are incredibly lucky to be on the same page regarding current and future projects. Our writing style and horror taste are almost identical, and we are very organized.

For example, when planning a new project, we sit down like a proper meeting, brainstorm, listen, understand, and throw ideas around until we’re both happy and clear on the project. It must excite us. Before we even begin to write, we need to know the entire story: the beginning, the middle, the twist, and the aha ending. We want to know everything about our characters as though they are our closest friends! More importantly, we already know why we are writing this particular story and the message we want to get across. After that, we each have our own tasks and know exactly what we are doing and why.

Communication is vital, and we always check in on each other. If there are any changes we want to make, we let each other know first and why. Simply put, working together is fun, and we bounce our creativity off each other. 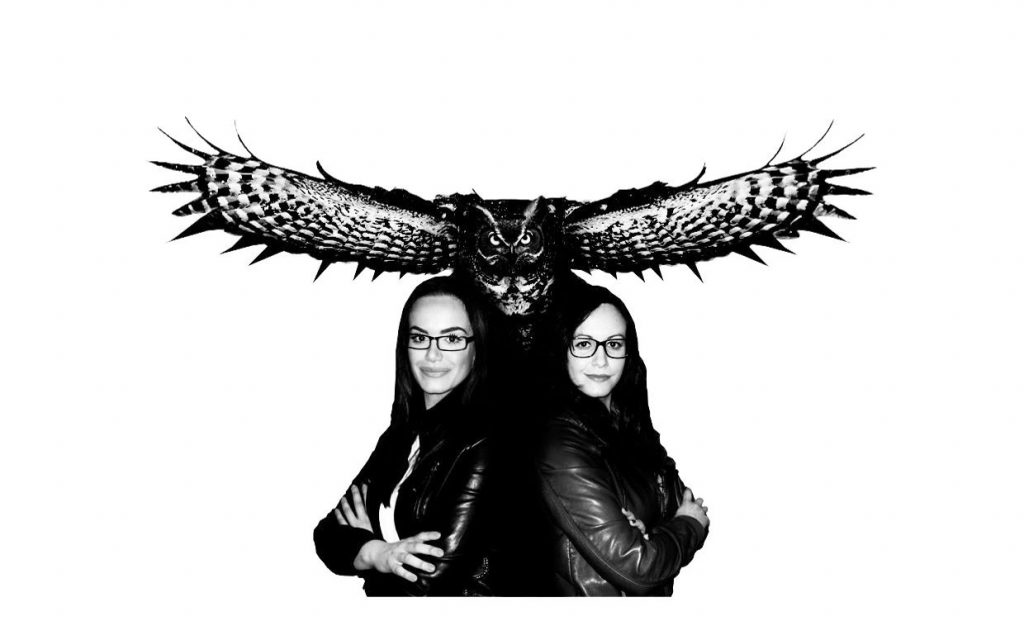 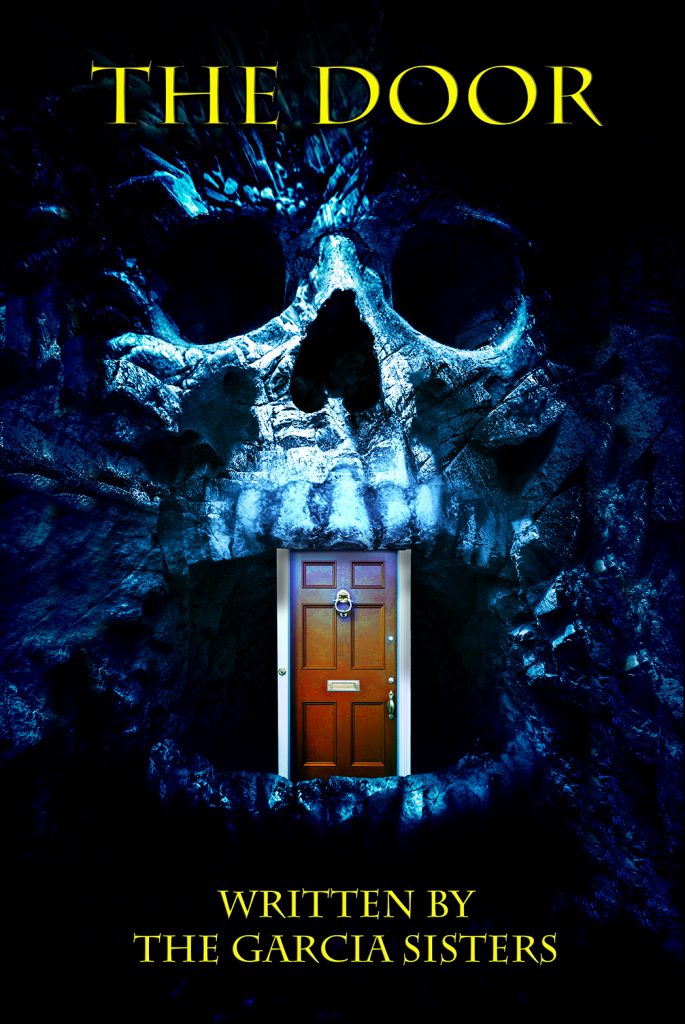 Can you describe your literary universe to us?

On our bookshelf, you will find old Stephen King books, Coraline by Neil Gaiman, Jack Henseleit, R L. Stine, Tales from the Crypt, old vampire comics from the ’70s, and of course, our books.

We have piles of screenplays that we love to re-visit, such as The Ring, The Grudge, and The Haunting of Hill House. Reading Schitt’s Creek and Fargo is a delight because we also love comedies and a good crime thriller!

Our strong collection of books are stories by authors who inspire us to be better writers, push the boundaries in storytelling, and truly believe in the power of imagination.

We are proud owners of every Goosebumps and Fear Street book that R L. Stine has written. Since we grew up with his scary tales, we often find ourselves re-reading his books. You can also find non-fiction books that we have as references: books on the paranormal, hauntings, witches, sacred symbols, and folklore are often used to help craft our story.

Before we even begin to write, we need to know the entire story: the beginning, the middle, the twist, and the aha ending. We want to know everything about our characters as though they are our closest friends!

What were your references and your inspirations to write “Monstra”?

For us, it is all about the fear of the unknown: everything that’s unseen, shadows that hide in the darkness, and everything that we wish did not exist but did. We wanted to explore the ultimate “what if?” – what would an everyday father do when faced with such evil that is not of this world? The whole flight or fight response is something we wanted to deeply explore, not just merely watch our characters try to survive.

Our protagonist, Josh Riley, is a true non-believer, has zero survival skills, and has lived his life using only logic. He is the most careful person you will ever meet. We wanted to thrust someone like him into a dangerous world where he is forced to become a believer. It is interesting to witness his journey from living in a bubble to realizing that other ungodly things are living in our world.

We believe in the paranormal and things that go bump in the night. Having lived previously in what we can say was a haunted house, we wanted to explore this even more. We also use a lot of symbolism in Monstra, such as a gothic key, a door to a world of the dead, a witch’s familiar, and crows.

MONSTRA won an Award at the Red Movie Awards, the story plunges us into a fantastic and gothic universe, how do you renew the genre?

It is not so much about renewing the genre but rather remaining loyal to our chosen genre with a fresh set of new eyes and approaching horror (and its many sub-genres) with the respect it deserves. After all, the great Wes Craven once said, “horror films don’t create fear, they release it,” and we certainly believe that to be true; how else can we release the audience’s fear with our stories?

We have always stood by the notion that if you can write a scary story without explicit blood and gore and still manage to terrify your audience, you have a great story! So, it all goes back to simplicity and tapping into what truly scares the human psyche.

Our personal take on horror is to mesh in other human issues such as narcissism, family dysfunction, grief, dealing with the law, and of course, a nefarious witch! 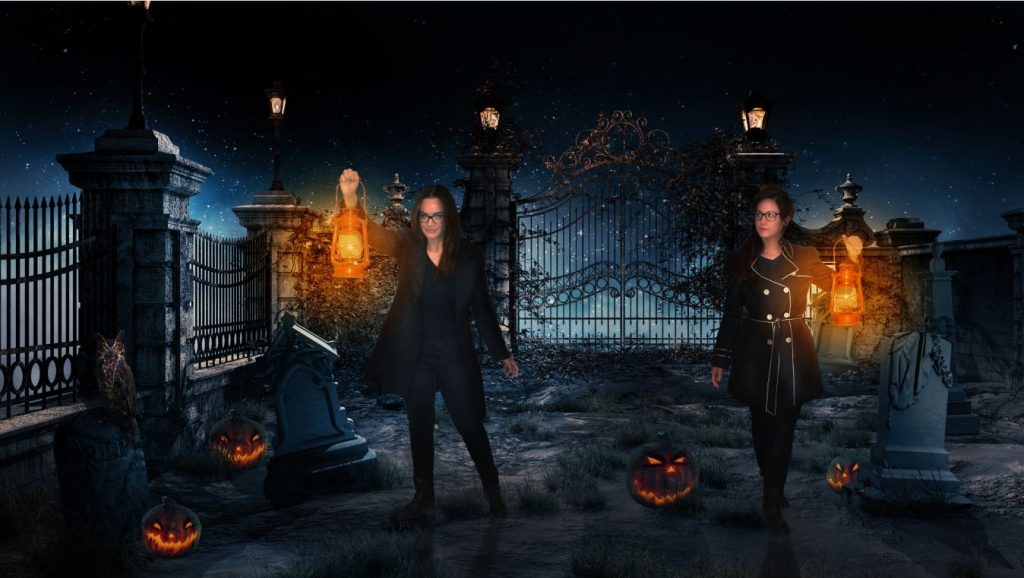 We have always stood by the notion that if you can write a scary story without explicit blood and gore and still manage to terrify your audience, you have a great story!

Would you like to see your writing adapted to the screen one day, and if so in what form? Film? Series?

Seeing your work moving and breathing on the screen is, of course, wonderful and every screenwriter’s dream, so yes, that would be amazing. It would be a dream come true. Monstra was originally a feature, but it did not feel right, and we noticed that readers were not really connecting to the story. Therefore, we wrote Monstra as a limited, eight-part series that we believe would translate better.

Isn’t it too complicated to make a career as a writer at the time when all digital is spreading everywhere?

Not at all, on the contrary, it is a lot better! Connecting with other passionate screenwriters, directors, and producers in the digital world is a lot easier. Having an online presence has been a blessing because it’s given us a chance to express who we are and what our writing is about to many people worldwide.

However, we have seen the bad side of the digital world—our debut book was illegally downloaded more than 76,000 times! The website in question suddenly disappeared after that. Oh, dear!

Keeping up with modern changes is a must, but before the world went almost 100% digital, we relied on word of mouth, which was a big barrier and a slower process. If used correctly, welcoming the digital world as screenwriters can be wonderful. We are lucky to have made great friends and connections this way and, of course, to be part of the RED Movie Awards! 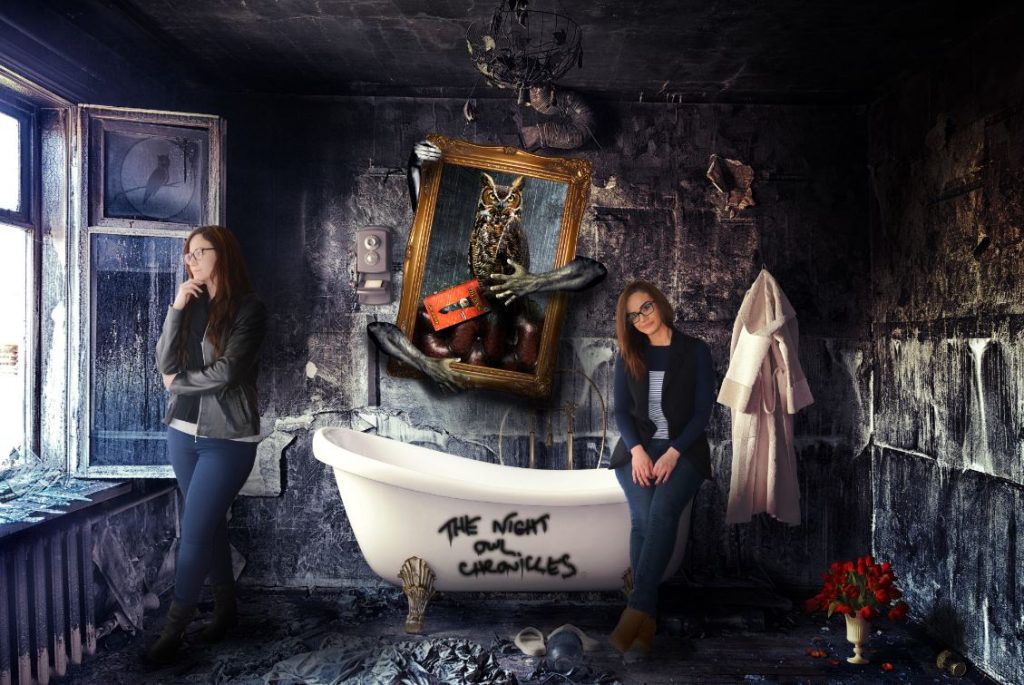 We are very excited about our next project, Find Me. It is another limited series that is based on our second published book. We are really pushing the boundaries of what a human can withstand. We always go back to the fear of the unknown but also the fear of sudden isolation. The story charts Isabelle Humphrey, who takes her half-brother Jason to the movies.
Suffering from a nasty hangover, she falls asleep, but when she wakes up, she sees that she has been left behind in the cinema. Even Jason is nowhere to be seen. Upon searching for others, Isabelle makes a grim discovery that she is alone in the world’s largest mall, but she is not entirely alone; something sinister stalks her every move. The threat of a dark, malicious force is at work. Leaving the mall is impossible as all exits have been sealed shut. Soon, Isabelle finds other people left behind, too. Isabelle and the others must piece together why everyone has vanished, find Jason, and survive the monsters lingering outside the mall. We are super excited about this!

To end this, we want to thank the Red Movie Awards for allowing us to tell our story. For any writer reading this struggling with plot or structure, remember this, there is no failure, only feedback. Write, practice, learn, and BELIEVE.