Tiffany, tell us a little more about yourself. Where did your desire to be an actress come from?

Hello! And thank you for this interview. My desire to become an actress came from a variety of areas in my life, years before I knew for certain that I wanted to become an actress. I’m originally from Jamaica and culturally, Jamaicans are extremely theatrical, animated and intriguing when telling stories or relaying experiences. Listening to a Jamaican person tell a story, regardless of the topic, is always captivating and entertaining. Growing up surrounded by that, I believe was my first influence to story-telling.

When I first started watching films and having my favorites, I was always touched by the ones that I felt most affected by. I noticed that my favorite actors were the ones that were most committed to the roles they played, but also were the most authentic. I also loved that telling a story, wasn’t only having to say the words, or write what’s happening. Acting was another form of communication in a way-portraying a world and a life in which an individual inhabits. People have so many layers…you can never really know how anyone might react to an event, receiving some news, or seeing something for the first time. Portraying a person, a life with so many layers, backstory, and life-experience, has always been fascinating to me.

Listening to a Jamaican person tell a story, regardless of the topic, is always captivating and entertaining. Growing up surrounded by that, I believe was my first influence to story-telling. 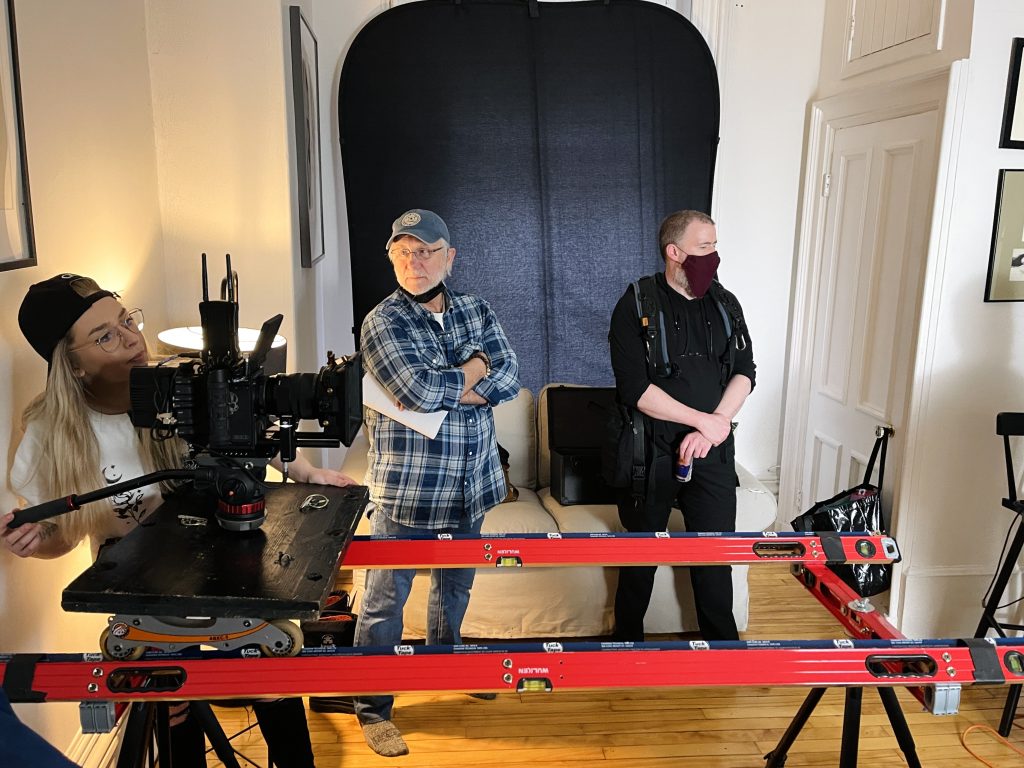 What were your references and your inspirations for making “But I Want to Leave the Party”?
Mais Je Veux Quitter La Fête or its international working title, But I Want to Leave the Party is an ambiguous retelling of my own experiences at a difficult time in my life. I was most inspired to tell this story, because I wanted to make a film that gives an honest perspective of what it’s like to struggle with depression and declining mental health. So many people are familiar with this experience, but it hasn’t always been socially acceptable to express or openly articulate it.

You won an Honorable Mention for your acting at the RED MOVIE AWARDS. Can you tell us more about the work done? How did you prepare for the role?

Firstly, I am honored to have won this Honorable Mention for acting, especially in a festival based in France. Learning French for the first time in 2016 was unnerving, so speaking French for my first short film in 2022, even more so! To gain recognition for Best Actress, by a French festival, by native French speakers is an honor that means so much to me. With all that said, one of the ways for preparing for this role, was in fact the language.

I was so worried about how I would sound and be perceived, so upon completion of writing my script, running it through Google Translate, I consulted my private French teacher, Alexandra Moreau, as well my directors wife (she is from Paris), to read through the entire script on several occasions-first to correct any Anglicism’s, so that the French language would sound more authentic of a person living between Paris and London.
There are so many expressions between different languages, and even countries that speak the same language, that do not translate. One example of this was, I originally wrote Ellie saying in the narration, that she needed to “get things off of her chest”, which was then changed to an expression that feels more authentically French, which was, “J’avais besoin de vider mon sac” meaning, she “needed to empty her bag”.

I also consulted the help of 12 French speakers, through an app called “Hello Talk” which allows you to speak or text with a native speaker of a language you are trying to learn. So, using this app, I sought out French speakers from all over France-I would send them one paragraph of the script, have them read it to me, read it back to them, and receive critiques as to what to change, pronounce better, etc. It was important to me to get feedback from French speakers that I do not know personally, because at the end of the day, it wouldn’t only be my supportive French speaking friends watching the film, it would also be native French speakers worldwide that I don’t know.
In addition to all the mental preparation, conversations with my director about my experience with depression in the weeks leading up to filming, I spent as much time as possible working on the language. 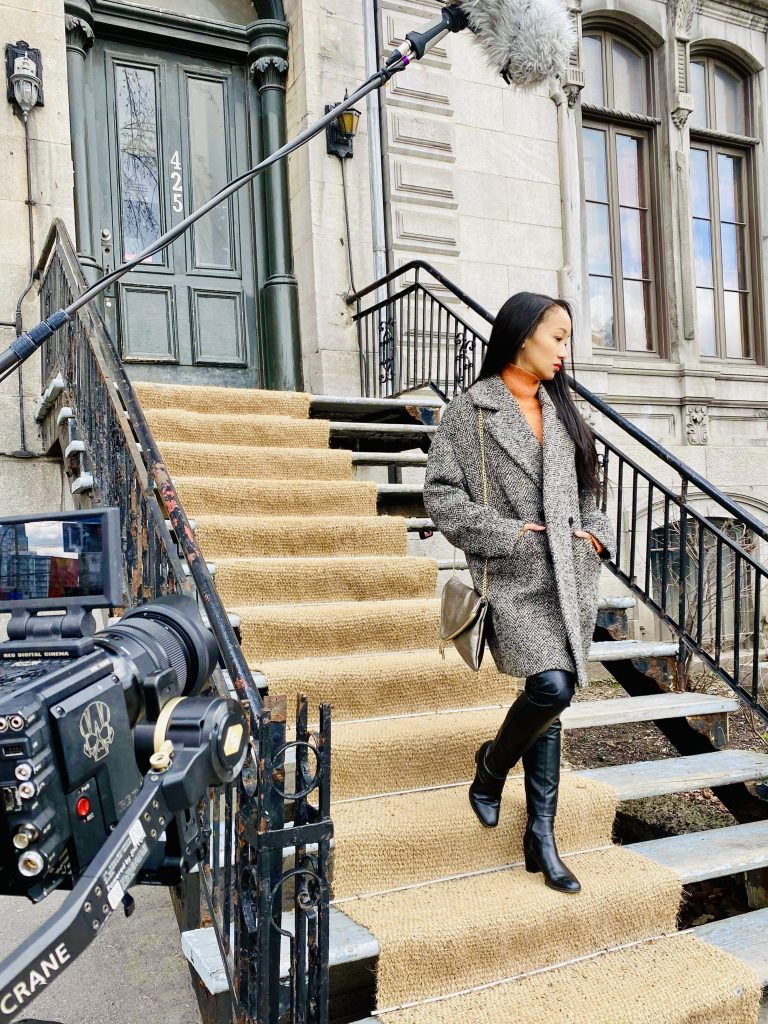 You develop a heavy subject in the film: depression. What was it like to work with Gilles Plouffe?

Gilles is wonderful to work with. Several weeks leading up to filming and directing me on set, we had a few meetings where he spent a lot of time asking me what things had been like during those dark moments of my life, to better understand how to direct me, and inform the crew on set.
He was very protective of me in between filming, as naturally, I felt awful the entire shoot…and even the week after! For a full week after we had wrapped, I had a headache that would not respond to any medication, from crying all day for so many takes and scenes during filming.

There is such mastery in the screenplay, did you face this subject from near or far?

Mais Je Veux Quitter La Fête or its international working title, But I Want to Leave the Party is loosely based on my own experiences at a difficult time in my life. So difficult in fact, I had to figure out how to tell this story.

I wanted to get close enough to some memories to deliver an authentic portrayal of depression, but I needed to form some distance as well, as the experience was extremely unhappy and despairing. I found that the best way for me to do this, was to create a character different from me, from another side of the world, speaking another language. Mentally, that was the only way I could revisit this story. So, to answer your question, I faced it closely while filming, but from a “safer distance”.

You are both screenwriter and producer on the film in addition to being the lead actress – Is it difficult having several roles on a project?

The short answer is YES. Absolutely! And those are just the roles I credited myself for. I was also craft service, the location scout and manager, script supervisor, set decorator, wardrobe, hair department, transportation service/driver, etc.
I also directed all the editing in post-production, directed the film’s score with the composer, as well as the film’s trailer. My husband and I fully funded the film ourselves. I am habitually an organized person, so email correspondences and communication were the easiest parts of producing for me, I will however, look into hiring some assistance for my next film-both secretarial work and someone to help with physical work (lifting or carrying heavy objects, driving, running errands, etc.)

I wanted to get close enough to some memories to deliver an authentic portrayal of depression, but I needed to form some distance as well, as the experience was extremely unhappy and despairing.

Is it easier to write a story knowing that you will play the role later?

As an actor, when I am presented with auditions for film roles, I usually need to do some research to understand and embody a character and their experiences. But as the actor and writer, I was using my own personal experiences as a direct catalog for the character, which made things both easy and difficult. “Easy”, because I had experienced it and had my memories, but difficult, as I had to mentally revisit a very difficult and unpleasant time in my life, that has taken years to begin to heal from.

The morning after we wrapped filming, my husband and I took a walk down to the river in Montréal. I was immensely exhausted, every part of me felt heavy, but I felt ecstatic that this film was materializing…and I wondered in that moment, “OH MY GOSH I feel like shit…will filmmaking always be like this?”
Truthfully, I don’t know yet-this was only my first film. Ha-ha!

Filming happened to take place during the end of the pandemic when things were starting to re-open and productions were getting back to work. Covid has definitely given us an added layer of risk in assembling and gathering film crews into what are often small spaces.

Very thankfully for this film, the shoot was very short, and my crew and I acted responsibly. Should circumstances be the same or similar when I make a feature film (which will require a significantly longer schedule and more exposure for everyone involved) I can see how I would be presented with added constraints in order to keep everyone safe over a sustained period and what would more likely be multiple locations.

What is your next project?
At this time, I’m currently in the last phases of getting my production company incorporated, and I have several scripts in development. I still need to decide which I would like to proceed with next, as well as how to execute it. My focus for the moment is to continue the festival run with Mais Je Veux Quitter La Fête, and eventually find a home for it with distribution. 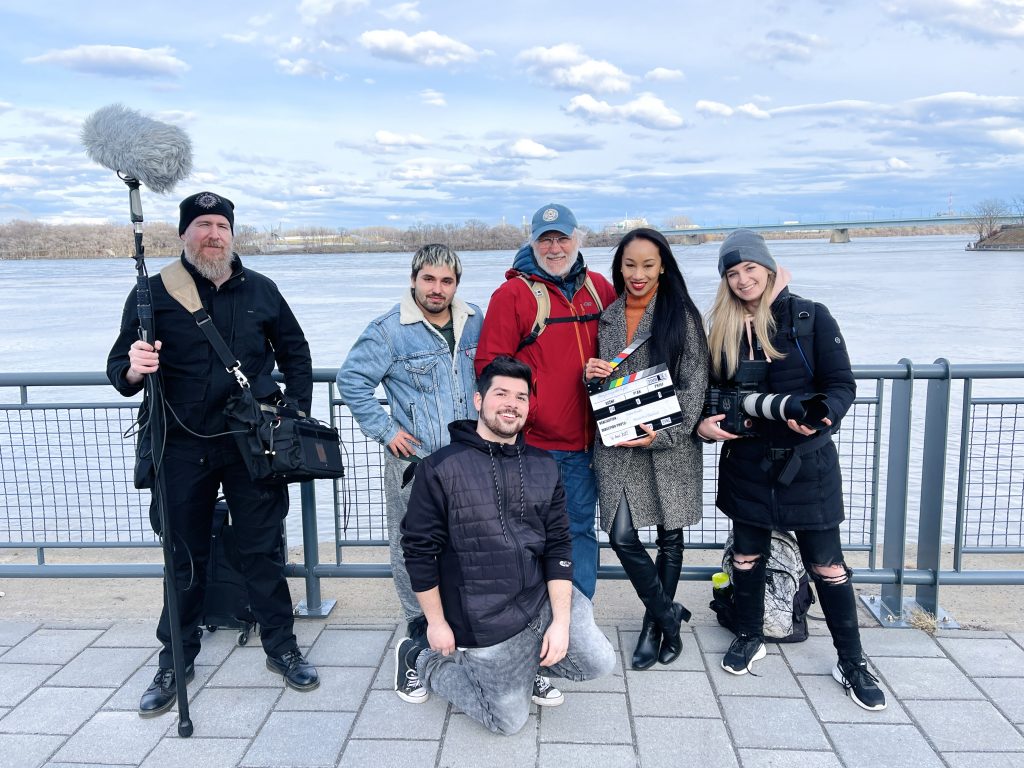